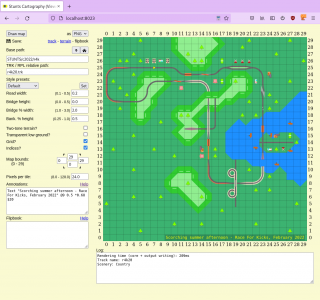 Stunts Cartography, or Cartography for short, is a set of tools for creating track maps. It provides a configurable, vector track viewer with support for various kinds of annotations, as well as auxiliary tools for setting up visualisations of data extracted from the game, such as animations of race laps.

The Stunts Cartography project was started in January 2013 as an experiment by Duplode. The initial goal was creating a track viewer geared towards race analysis, with support for conveniently adding track sector markers and other annotations. An early design decision was to, rather than using raster icons to display track and terrain elements, render the tiles using computed vector graphics. That allows for generating sharp-looking maps of multiple sizes, as well as making certain visual aspects of the maps, such as road width and bridge height, configurable.

In a serendipitous way, just as the initial prototype of the vector track renderer was being finished in February 2013, a discussion started on the Stunts Forum about the possibility of recording car positions from a lap for further analysis (see the "Replay logging" thread for the chronicles). Sensing that would be a perfect fit for the track viewer, Duplode added support to the renderer for overlaying lap traces on the map, both as a single path from start to finish and as separate frames with markers for the car position, which could then be combined into a video reconstitution of the lap. In a parallel development, dstien prepared the restunts-powered tool repldump, which creates, from a replay file, a binary dump of the car and game states through a lap. repldump made obtaining lap traces considerably simpler, and a converter for its binary format was incorporated to Cartography not long afterwards. Visualisations of game data have been part of the scope of the Cartography project ever since.

The first release of Stunts Cartography was in July 2013, with the basic functionality of the track viewer being made available through a browser-based GUI. Below are the releases of Cartography and the major features added by each of them: