Long name: Zak McKracken's Stunts Competition, or Zak's Stunts Competition. An online competition running continuously since March 2001, now in its 8th season holds the title of the longest running competition. It was also the first competition which required racers to drive different cars each month, and also the first one to implement a fully automatic php based replay sending form and scoreboard system. Although there were competitions with higher number of participants, ZakStunts is often considered as the most influential competition of the online Stunts community. 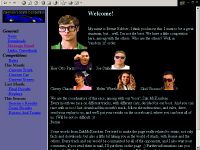 ZakStunts site circa 2001...
The first season only started in March, and only had 9 tracks, as one track, during the summer lasted for two months. The original concept included the Opponents commenting the sent replays. Competitors mainly arrived from the biggest and best of the time - the Kalpen Competition, and achieved 10 racers/month at most.

The winner of the season was Roy Wiegerinck, with Ben Snel and manager Zak McKracken finishing close. 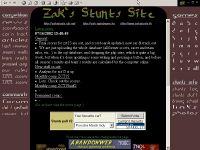 2002...
The second season was the first full-length season of ZakStunts. As the Kalpen competition closed and others not so popular, ZakStunts took the reputation of the biggest and most prestigious competition on the web. This season Teams were introduced, and racers started to cooperate with each other, or in some strange cases with themselves, using Ghosts. Racer number reached an incredible 20/month, and the number of replays sent started to get unbearable for the manager. Also ZakStunts didn't only host a competition, but served as an abandonware site too, offering various racing games for download - so raising the number of the site visitors and the racers.

During the summer months, three so called "Special" tracks were presented, with their averaged result counting as one competition track. These tracks required Cheated cars or Special rules to finish, and have shown the potential of some newcomers. From October a new feature, Leading Time Bonus, was introduced as opposite to a negative effect of Time hiding.

The winner of the season was expert driver Bonzai Joe, while a newbie, joined only in April, named Alan Rotoi, aka. 'The Dog' came second, and the former champion, Roy Wiegerinck only finished third. 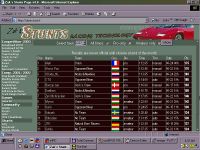 2003...
The third season gave a BIG twist to ZakStunts. Introduced a completely insane point system, and the Dual League, where the top 10 drivers formed the Pro league, and the others the Amateur league, Relegations/place changes on the last/first three places took place each month, Pro/Amateur drivers raced the same tracks.

Of course in order to handle this excessive amount of activity and replays, a semi-automatized PHP system was created and installed by Zak McKracken, where racers could send the replays online, with the help of a web form, and so their times immediately appeared on the Scoreboard. ZakStunts also stopped to work as an abandonware site, as the required number of racers seemed to be reached (around 20/month)

In this season, the competition got really fierce and hard, and a previously unknown amount of teamwork was shown by the teams. The community life was also flourishing, with the forum running and night-long chats taking place in the IRC chatroom.

Apart from all this chaos, a secondary competition (called ACT) was also hosted, with tracks designed each month by the winner of The 2002 Track Design Contest (TDC), Akoss Poo. We can conclude, that 2003 was perhaps the busiest season of ZakStunts.

Winner of the season was frenchman Alain from the dominating team Orion, former champion Bonzai Joe came second, and the third place on the podium was reached by Akoss Poo. 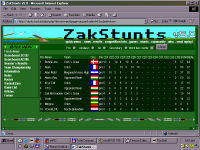 ... and 2004.
In its fourth season ZakStunts tried to return to a simpler form. Dual League and secondary competition were dropped, and the point system was also simplified. In order to restrict heavy teamwork, the maximum number of team members was reduced to 4. Another improvement was the TDB rule, which similar to the 107% rule in Formula One, gave one bonus point to the drivers close to the leader.

Racer number dropped to an average of 15/month, and the site visitor number to its half. Still, community life was going on, and in August the first World Stunts Meeting took place in Budapest.

With team Orion falling apart, new top drivers appeared. Thanks to Alan Rotoi a very strong South-American Stunts scene evolved, and the better racers started to appear on ZakStunts too. One of them became champion: Gutix. In a hard battle, Akoss Poo came second, and former champion Bonzai Joe third.

In 2005, the rules were more simplified, and the original, simple linear point system was reintroduced with the aid of the successful LTB The goal of ZakStunts was no more gathering new racers, but to present a demanding competition for the top dogs. Still, the number of participants was a huge surprise, surpassing 30 racers on some tracks. Racers who would have got zero points received fraction points, so a ranking still could be made.

The community became more compact, but also more active, altough many former regulars have left, there were still 15 racers, who raced on all, or almost all the tracks. We also had the unforgettable second WSM in Denmark.

Team race was dominated by the Argentinian-Brazilian team created by Alan Rotoi: Meganium Aces High. Alan only stayed in the background, managing his students, like former champion Gutix, and the new champion, who raced like thunder, but never talked: Ayrton. Former champion Alain made a successful comeback, and finished second, while the third was the highly evolving Hungarian: CTG

This year not much has changed. The system stayed the same - as it was considered successful, only the first 15 racers received points, not the top twelve. The overall racer number decreased a lot, but there was still a hard core, with 15 racers there, almost each month. Another meeting took place, again in Budapest, perhaps a bit more quiet than the previous ones, but we greeted each other as good old friends, and parted as even better ones :)

This season was the battle of the teams. Meganium Aces High, Cork's Crew and Orion all battled for the Team Champion title, but finally the reborn Orion won beating "Oldies" Cork's and "Dog team" Meganium.

Nobody managed to win the ZakStunts twice until 2008 - and suprisingly this year again a newbie won the battle: Renato Biker from Brazil, under the guidance of former champion Alain. CTG made another step of improvement, and arrived second, while the best live racer Bonzai Joe came third.

At the end of the season, manager Zak McKracken started to prepare for his state exam and so started lose his motivation, racer number and community activity dropped significantly. Something had to change.

This year was a major turnaround again. As there were many successful and actively managed competitions running beside ZakStunts, something exceptional had to be offered. The idea was to have special rules each month, similar to the ones used on the summer bonus tracks of 2002.

Altough some of the rules turned out to be quite intresting and funny, racer number and activity dropped and dropped , barely reaching 10/month, and the manager's motivation sunk with it. Still, the decreased number of racers didn't mean the drop of the competition value, races were still hard as a rock.

The break did good to the manager :) He was thinking a lot, and eventually found out, that he can't live without his competition. After several new ideas born and buried, the concept of the 2008 season was announced, and the last track of the current season presented: no Special rules, and a well-known track: Default.

2008 was the rebirth of ZakStunts. The manager admitted that the concept of the special rules was a failure, but as many of the other current successful competitions announced planned closure, there was a need for ZakStunts to go on, and let Stunts live forward.

The new concept of 2008 can be best defined as "the freedom of choice". Everyone was allowed drive with his chosen car and the achieved times are multiplied with pre-set bonus percentages based on car tests. This way everyone can bring out the best of his talent, using the most favorite or most suitable car for the track.

After a few minor problems the concept seemed to work fine. Some driver criticized the new concept as it demands more time from the racers and makes the creation of race statistics really hard, but the positive results were clear to see: more racers and more replays sent.

The main problem of the new car bonus percentage system was the problem of the ever-growing bonuses, which was temporarily solved with bonus adjustments throughout the season. However with the new rule set of the 2009 season this problem seems to be resolved.

The level of the 2008 competition was clearly above the 2007 level, approaching previously seen lower-activity seasons, such as 2006 and 2004.

The season was special in the aspect of winner. One racer could do what others could not done before: Ayrton won the ZakStunts title for the second time, by winning all the tracks throughout the month. Racers of the newer generations, Duplode and Mark L. Rivers came second and third.

The 2009 brought only minor changes and corrections to the 2008 rules. As the community got stronger, the team championship was also restarted after its one-year break. Several newbies appeared in the first races. Hopefully this gives a further boost to the community this year.