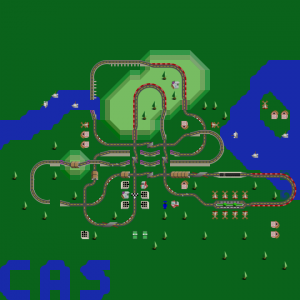 4:00am is a track by Cas that has played many roles in the Stunts online community. So called because it was conceived late atnight, it is considered by the author to be his favourite and has been featured in World Stunts Championship, ZakStunts and Race For Kicks. It comes included with Bliss Track Editor.

According to file dates and information from the moment, the track was completed on 28 February 2006 with the intent of participating in a track design contest that was part of the then active World Stunts Championship, run by Paleke. Until then, the tournament had issued tracks all made by the organiser and it had now been proposed that a few tracks made by participants in the tournament could be included. Because everybody wanted to participate, a contest was held and a few tracks were chosen (approximately four). Each participant could come up with two tracks. One of the winners was 4:00am. The tracks were chosen by the tournament participants, who voted for their two most favourite tracks not counting their own. The tracks with the greater number of votes were the winners. 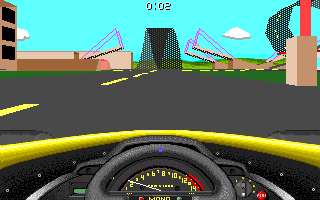 4:00am start/finish line. Centre of congestion

The track was made with a focus on scenery. In Stunts, even with the highest level of details configured, one can only see so far. Unless scenery and track elements are very close, they are not displayed. To ensure that the complexity of the track would be visible, Cas set up a congestion centre with four crossroads completely filled with track elements immediately adjacent to one another. This creates a very appealing view at the start of the race. The single-pathed track re-visits this centre several times from different angles.

Although 4:00am is slightly long (an average racer can do about 2:30.00 with the Porsche March Indy), it contains many jumps and banked roads, suitable to fast racing. Only at a few points in the track, the racer will need to come near a stop because of closed corners, at least in OWOOT. Free-Style racing of this track allows for powergear to be exploited.

4:00am has been called a Kalpen-like track by Akoss Poo and Shoegazing Leo. The former also mentioned in the forum, while the race was on-going:

"Probably the best track since my return. Duplode's Eroica might rival with it only." and "Really, one of the best tracks I've raced on, and definitely the best of the recent years."

In general, it has been very well received.

Importance in the history of Bliss/Castunts

The first version of the editor, then called Castunts, was in the process of being developed when 4:00am was designed. However, the track was designed mainly with the built-in track editor and some final touches were later made with Track Blaster. Yet, Cas chose to edit the track file to include meta-data in preparation for a feature to edit that, which was planned for Castunts. This was never implemented in that version, but later on, this meta-data present in the track file would cause some problems when it was going to be featured in ZakStunts. See Bliss format byte controversy.

When the new version of Castunts was made (starting from 2.0), 4:00am was included with it and has continued to ship with it until now, as of current version Bliss 2.6. Until Race For Immortality was held, it was 4:00am that was used as a reference to estimate racing times on tracks.

The 4:00am track was first officially featured in March 2006, in World Stunts Championship, where it was raced as Free OWOOT. Much later, in May 2015, it was presented as ZCT166 in ZakStunts, with Duplode, Akoss Poo and Alan Rotoi getting to the podium all with the Porsche March Indy. This was the track's debut in Free-Style. Then in April 2021, it was featured in Race For Kicks with the Speedgate XSD, as a Strict OWOOT race, and Duplode, KyLiE and Cas filled the forum.

The five best replays have been kept, so the following positions are official and verified. Slightly free OWOOT (almost strict), all with Porsche March Indy:

All replays are in the database, so again, all official. Free-style. Almost everybody that participated used the Porsche March Indy, except dreadnaut and Svenne, who chose the Melange. The positions are as follows (actual raced time):

Results in Race For Kicks

Again, all replays are kept in the database, so all official. Strict OWOOT. Everybody used the Speedgate XSD. There were six participants, three of which submitted NoRH replays as well as RH. Replay-handling (best) laps were:

NoRH laps were as follows: