The powerful McLaren Honda MP4/4 was the first F1 car made for Stunts and was released on September 3rd 2011. It is from the epic 1988 Formula 1 season.

This car was naturally based on the Porsche March Indy to speed up the 3D modelling process. It has two color schemes, but they only differ for the helmet to represent Senna and Prost's racing helmet.

The dashboard was made using some bits of the Porsche's dash, but most of it was designed from some rare photos taken of the real car that were found on the internet.

This car features a digital bar rev counter, a design first in Stunts. Although it was just a trick that uses the analog rev counter needle in a linear coordinate movement, it works accurately but shows some flickering caused by the steering wheel dot rendering that happens just below it.

The performance specifications were adapted from the information found on the now extinct F1DB.com site (among others in that period) and a PDF document that Zapper surprisingly found with an official engine performance report.

In-game, it performs greatly and is the fastest 0-60 MPH runner (against official cars). It's light weight, grips more and brakes better than its main "original" in-game rival, the Porsche March Indy, but has a lower top speed. 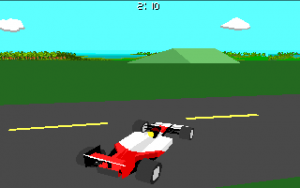 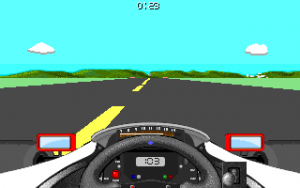