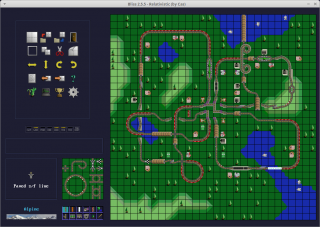 Formerly known as Cas-Stunts or Castunts, Bliss is an external track editor for Stunts developed by Cas. The editor is focused on ease of use and provides a variety of powerful tools. As of October 2020, current version is 2.5.7, released on 22 October 2020. Official site is http://www.raceforkicks.com/bliss. It can also be obtained from its repository at https://notabug.org/xlucas/bliss/releases.

In 2006, during the third season of World Stunts Championship, run by Paleke, a track design contest took place. The winning tracks were to be used for some of the season's races. Cas, who had previously only used Stunts' internal editor, was now using Track Blaster Pro with the purpose of adding normally unallowed features to his tracks. He found it to be hard work and ended up designing most of one of his tracks (4AM) with the internal editor and then, completing the work with Track Blaster instead. This experience prompted him to start the Castunts project. Castunts was a mouse-driven editor that used the original graphics from Stunts' internal editor and allowed "drawing" on track by just dragging the mouse cursor. It also included a "brush-like" terrain editor, which was extremely comfortable.

Paleke himself visited Cas and saw the editor working, which he considered promising, but the project was never completed or published as Cas entred a hiatus from Stunts and even Paleke disappeared after season 2007 of his tournament. The concept would be forgotten for several years.

In early 2015, following a second hiatus, Cas was planning a return, but remembering a failed project of the past (Vizcacha), did not want to come back "empty handed". He started to develop a new version of his editor, Castunts 2, that would run natively in GNU/Linux and Windows, besides DOS. Version 2.0 of Castunts was released on 7 March 2015 and sparked some interest, but some racers demanded extra features that were essential for a modern track author and a number of bugs were also found. Duplode made an enormous contribution in terms of feature testing and new ideas.

The project evolved for a long time before reaching a rather stable point, from which it's only been updated from time to time. Version 2.4.4, released on 5 October 2016 got the name changed to Bliss. This was desired because Cas felt the name Castunts had some resemblance to ZakStunts. Starting version 2.5 (21 December 2016), Bliss is free software, released under the GNU General Public License version 3. Before that point, it was released as freeware.

Bliss offers a mouse-driven interface that covers virtually all options available, yet it does count with a large number of shortcut key combinations, both for quick access to features and to quickly select track elements. It is possible to fully edit a track with just the keyboard, although the mouse may be necessary to access some menu options. Possibilities that could be found in Track Blaster Pro have been enhanced in Bliss, such as cut/edit/paste functions, rotation, flipping, undoing and redoing.

Like the original DOS version of Castunts, Bliss includes a terrain editor with which mountains and water can be placed and removed in a brush-like fashion. This is perhaps the single most different aspect in terms of time-efficiency when compared to other editors. Editing terrain the same way as in TB or the internal editor is possible as well, although this is seldom used.

The editor includes a track integrity check system, like the internal editor, also linked to the C shortcut key. The same system powers a complex track analysis feature, a menu that can be used to estimate the track length and the time it would take to traverse it with each car, the number of available paths and whether all or some of them are valid.

An automatic scenery generator is provided too. Most track authors prefer to do this manually, but the option is there to save design time or to serve as a base on which one can later add adjustments.

Some level of integration with online tournaments has been incorporated in Bliss. The Tournament menu option allows the user to connect to championship sites, download the current track and check the score table. Metadata can be added to track files in order to preserve the track title, author's name and other information. While ZakStunts does not make use of track metadata, Race For Kicks does, so this is a useful possibility for tournaments.

The track-shot and colouration options allow for the creation of images of the whole or part of the track, with or without a grid and with markings, ideal for tutorials and for setting racing rules.