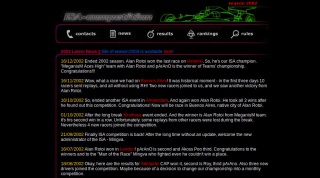 The ISA competition was a Stunts championsip organised by the members of the International Stunts Association (hence, the acronym), a group of Austrian racers led by Pershing II, Ruepel and Agent Orange. While it was active as such for only one season that lasted a few months from February to September 2002, it is considered one of the cornerstones in the formation of modern Stunts tournaments, having pioneered the definition of free OWOOT rules, also referred to as ISA rules.

The tournament did not really end at that time, but transformed. Mingva took over to ensure the competition's continuation and the rules changed in the next season. Thus, it evolved into the Indy Racing Cup. Information from the ISA season was placed in the new IRC website as season 2002.

The competition in 2002 [had] an administrative problem (can't remember what happened) but Pershing announced he couldn't keep administrating the site so Mingva, a motivated newbie at those times, did it. He kept the same site, design and rules until the end of the season. Then in 2003 he announced a 2nd season and a renovation of the design [...] and a change in the name from ISA [...] to IRC [...] and some rules.

It's notable how two championships that share the same history define today the two extremes of the OWOOT spectrum.

Each track had the name of a city and races were held monthly. Basing on the information from the website, the schedule was less precisely defined at the beginning, but it eventually was fixed so that races would start and end in the middle of the month (on the 15th). At the time, this was very convenient for racers that also participated in ZakStunts, where races usually started and ended near the end of the month.

The tournament rules were what would be called free OWOOT today. These are the rules as stated on the website that were preserved for the whole of season 2002, proper ISA:

ISA only season ended with Alan Rotoi in the first place (50 points), followed by Bonzai Joe (44 points) and CAP (32 points). 25 racers participated in the tournament season.