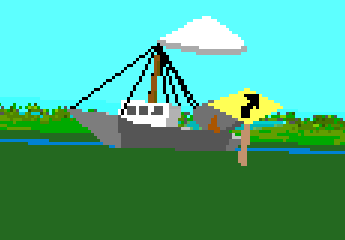 While driving, turning signs are occasionally seen before open corners, though not always. It is not possible to force a corner to have or not have one such sign; in fact, Stunts automatically calculates and decides whether a sign should be rendered at a certain location. This article describes the research on how this works and how it may be of use, despite the apparent insignificance of this detail.

A research made by Cas yielded the following rules for sign rendering:

While corner signs don't normally make much difference while racing (they don't even slow the car down, it seems), one may just want a corner to be at a certain spot just to make the track look cool or to have fun breaking it. But there are some other possibilities that could make more sense.

The way in which Stunts decides where signs are placed is very particular and it'd be surprising that a routine had been specifically designed to make this useless decision. Therefore, one should assume other aspects of track rendering and possibly path analysis might be related to this process. For instance, the way Stunts picks the location of the cameras that are used in F4 view is likely to have something in common with this. Also, when two paths have the same length, it is not completely clear which is chosen by the opponent. Because signs are placed following a procedure that depends on path analysis, it is to be expected that it could provide a hint on which path would be taken by the opponent as well.

In the event one may wish to create a high resolution 3D track renderer or otherwise issue a faithful representation of the track or part of it, it could be relevant to know whether a sign is to be rendered and where.

This is a forum topic created by Cas about this research here: [1]