The idea was to re-scale one of the models and convert it to OBJ to load it with CarWorks or Stressed and start working on it. The CERV III was chosen first. The 3D model produced lots of artefacts in Stunts, so it was simplified until it was more or less stable and then Cas made the first very rudimentary 3SH file with CarWorks 0.1. He also obtained the dashboard images from Test Drive III by brute force, taking screenshots of the game and made a very basic VSH file that produced many glitches. From that point onward, KyLiE worked alone on the model for months with Cas only testing it from time to time.

KyLiE adapted the dashboard palette and made some modifications to make it look better. He got rid of the glitches and improved the gearbox. The 3D model was also specialised for Stunts, although it kept displaying some glitches from time to time. He then started working on the physical parameters from scratch with Cas testing the car every now and then. Most of the production of the car was months of KyLiE working on it alone. Quite a lot of time was spent optimising the CGA and EGA dashboard palettes. While it's likely that nobody will ever see them, KyLiE wanted the car to be complete, as though it was included with the original game or possibly offered as an official add-on.

The performance of the CERV III in the Stunts world matches the real car as closely as possible. While it's impressive by supercar standards, it's important to remember that this is a road car, not a race car. It is similar to the Ferrari F40 in terms of acceleration and grip, however the CERV III has a higher flat track top speed. 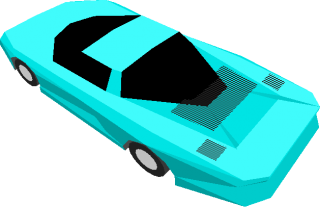