The power gear bug expression refers, in the context of game mechanics investigations, to the underlying cause of the power gear effect. Power gear is one of the most remarkable bugs of Stunts, being in essence an overdrive mode available to some cars and reached under specific conditions that makes the car shoot to its overall top speed (limited only by the maximum rpm of the engine and gear ratio) and become essentially unaffected by grass slowdown. A proper explanation for the origins of power gear has eluded and frustrated custom car designers for a long time, as finding a consistent relation to usual performance parameters and the occurrence of power gear proved difficult. To complicate matters further, there are different kinds of power gear, with subtle differences between them, as well as anti-power gear, which causes a car to slow down in conditions that might otherwise trigger power gear. This article aims to present an unified theory for explaining both PG and anti-PG effect which proves useful for car tuners in practice.

Stunts cars can be grouped into five classes with regard to their power gear behaviour, which are briefly defined below:

While the quantitative characteristics of the PG effect may depend on several other factors, the class to which a car belongs is exclusively determined by its mass. Let f be the fractional part (that is, the part of the number after the decimal point) of the quotient 65536/car_mass . The class of a car will then be determined by f through the following rule:

It is important to emphasize the value of f does not influence the critical speeds for PG or anti-PG; thus, a car which belongs to one of the PG or anti-PG classes may be unable to reach the effect depending on other parameters - for instance, a rigid PG car which cannot reach 225mph at maximum rpm and highest gear due to its gear ratio settings will never reach PG. 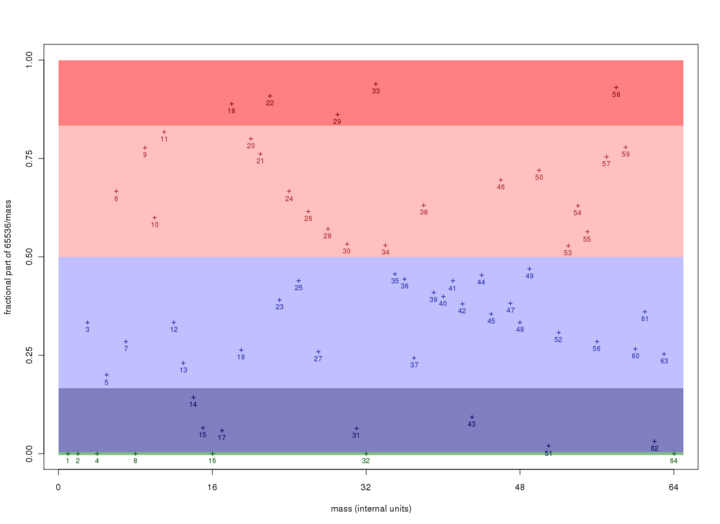 Although the "magic" designation for the 65536/car_mass quotient seems appropriate at first sight (as it seems to come out of nowhere), there is a reasonable hypothesis accounting for why the quotient is so important. The algorithm for determining speed increments per simulation frame must compute, directly or not, the ratio engine_force/car_mass . Available evidence strongly suggests that at some point of the calculation the result is determined as a 4-byte integer (instead of the regular 2-byte values used elsewhere) so that integer division by car_mass can be replaced by multiplication by 65536/car_mass with the aim of making the algorithm reasonably precise. The power gear bug most likely originates from improper handling of truncation errors in evaluating the quotient, leading to non-physical values for car acceleration.

An approximate expression for the critical speed of flexible PG and and anti-PG cars is:

In the above expression, the speed is in mph and all CAR*.RES parameters are given in internal units (that is, the values are taken as they are read from the file). The surface constant is a value that grows with the surface inclination; for common ramps it is approximately 200000 - and for loops (which get nearly vertical at places) it is expected to be much larger, lowering a lot the critical speed. The qualitative result given by the expression is that any parameter changes that lower car acceleration (other than increasing car mass) will reduce the critical speed. That's the reason why the Acura has lower critical speeds than Indy, for instance. The expression for critical speed ties three essential car features. That implies anyone interested in making a flexible PG or anti-PG car will have to design the car around the desired PG behaviour, potentially leading to lots of undesired compromises.

The PG classes for the original cars are (car masses are given in brackets):