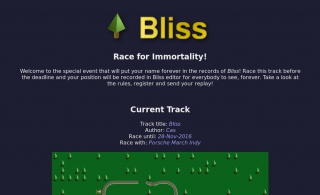 Race For Immortality (sometimes stylised "R4I") was a single race event held between middle October and late November 2016 organised by Cas. Upon completion of the race, the replays were published and incorporated into the distribution of Bliss Track Editor, which now includes a list of "famous racers" and uses the information gathered in the race to estimate the lap times of the participants on any loaded track.

On 5 October 2016, version 2.4.4 beta of Bliss Track Editor was released. It was the first version called Bliss and Cas was planning major changes. At that point, the editor included a list of "famous racers" in the Track Analysis menu and could calculate estimations of the times a lap would take them on the loaded track. This was based on the track 4AM, which had been included with the editor since the beginning, but the results had been taken from different early races and were not accurate or representative of the racers in the list, as some racers pointed out. Then, Cas decided to organise a single race with OWOOT rules so that the participants would form a new list that would remain forever in Bliss.

A new track called Bliss was designed by Cas himself and the race ran from middle October to late November. The participation was good and the results were published when the race ended. Next release of Bliss (version 2.5) was the first to include the new list and the replays from the race as well as the track.

The success of Race For Immortality led to the subsequent creation of the Race For Kicks tournament, also hosted by Cas. Yet, that championship proved significantly less popular. A few racers that were not present during R4I have expressed their interest in a new race, but updating the results would mean a sacrifice since, for instance, AbuRaf70 participated in the race before his death in 2017.

It was clear that the race had to have OWOOT rules, for free-style driving is extremely unpredictable in terms of lap lengths. The car chosen for the race was the Porsche March Indy, which was the only one allowed, and replay handling was permitted. The track is fast-paced and features an unusual double-jump, which, as was noticed later, made it apparently impossible to complete a lap with automatic gears.

Participants were allowed to post a RH lap, a noRH lap or both. Thus, two scoreboards resulted: