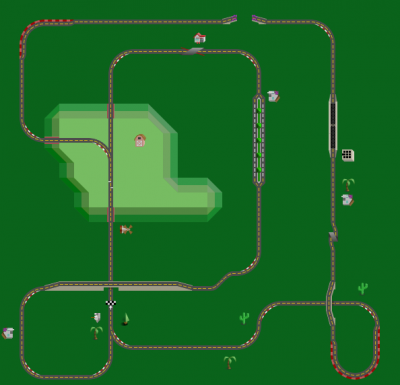 Note: This article refers to the track coming with Stunts as default.trk. For the replay, see Default (replay)

Default is one of the six tracks from Stunts' set of pre-made tracks. As the name implies, it is the track selected by default whenever the game is started (and in fact Stunts will fail to start in the lack of a track file named DEFAULT.TRK in the game root directory). Since it is nearly always the very first track a player comes across, as well as being short and relatively simple, Default is commonly used by racers, especially newbies, as a benchmark. Another interesting trait of Default is the presence of two different paths, one of them being substantially longer and somewhat trickier than the other. That design characteristic opens the way for dual-way switching exploits, necessary for reaching times comparable to the overall records.

Besides holding a number of unofficial or semi-official "permanent competitions", the Default track used for a very special ZakStunts race, ZCT79 with the Porsche March Indy. That choice, loaded with symbolism, was motivated by ZCT79 being the closing race for the troubled 2007 ZakStunts season, held only after an unprecedented three month break of the competition. The race, after many successive world record breakings, was won by Ayrton.

The track file name is, of course, DEFAULT.TRK. It has to be so for the game to properly load it at the begin it. However, there's a very solid theory that suggests that this track must have had an original, more meaningful name.

A just installed Stunts will include a number of tracks that make reference to five of the six AI opponents that the game has to offer: BERNIES.TRK for Squealin' Bernie Rubber, JOES.TRK for Smokin' Joe Stallin, CHERRIS.TRK, for Cherry Chassis, HELENS.TRK for Helen Wheels (this is a reference to Paul McCartney's car) and SKIDS.TRK for Skid Vicious (a reference to Sid Vicious, the bassist from the Sex Pistols). There isn't a track name OTTOS.TRK, which would be expected, for Herr Otto Partz. It is thought that, instead of creating a new track to be the default, at some point, DSI decided to just rename Otto's to become Default.

Please note most of the results here presented were not officially confirmed, and should be taken mainly as reference values.

As of July 2022, the Permanent Competition at Race For Kicks, which holds replays for its laps, has a best record achieved by KyLiE running OWOOT and NoRH with the Porsche 962 IMSA on 26 August 2020. Lap time is 1:15.45. The best official Free-Style record, also from R4K, is actually longer, at 2:23.47, by 1337haxoryt, with the Toyota Sprinter Trueno. As this is far from the best unofficial records, it is expected that, should at some point interest in this track regrow, significant updates would be made in official records both OWOOT and Free-Style.

In [Stunts forum], a replay by Bonzai Joe on 10 November 2015, achieves 1:01.35 with the Porsche March Indy, verified. Reported as NoRH and on verification, found to be "almost OWOOT", only going off-road very briefly at a chicane, this is a very significant contemporary record. On 19 April 2019, Seeker1982 posted two replays. On the first one, he achieves 1:02.30 with a Free OWOOT replay (never goes off-road, but does skip a corkscrew), also with the Porsche March Indy. Ten days later, he posts a very similar one, only this is Free-Style (as it does go off-road briefly at the chicane) and is done with the McLaren Honda MP4/4. With this replays, he completes the lap in exactly one minute. On 14 January 2015, Akoss Poo registerred a 1:02.10 Free-Style replay with the March Indy. On the 9th of the same month, Shoegazing Leo had registerred his own 1:11.80 with a Free-OWOOT replay with the same car. All of these records refrain from using dual-way switching.